arilyn Wheaton, the former director of the Marshall M. Fredericks Sculpture Museum, worked at Saginaw Valley State University from 2006 to 2018. During those 12 years, she and her colleagues doubled attendance at the Museum through a passion for cultivating a sense of community and an understanding of where and how to market the Museum to visitors. “One of my goals was to make the Marshall M. Fredericks Sculpture Museum relevant to every student at the University,” she says.


Wheaton focused on encouraging students to get involved with public projects, using marketing strategies to attract people in the community, and bringing in exhibitions that would encourage people from Michigan and beyond to visit the Museum. Ka Vang, a 2017 graduate of the Graphic Design program at Saginaw Valley State University, often passed the Museum on the way to her art classes. “When I was still going to school there, I remember the Museum was offering a lot of opportunities and working with a lot of schools and youth groups,” Vang says.


Wheaton’s visits to other art museums across the United States and around the globe inspired her to create an app for the Marshall M. Fredericks Museum, an app that would provide expanded information about the displays and allow students and community visitors to take a self-guided tour. “You can walk into a museum and read labels, but you cannot read enough labels,” she says. “No museum can print enough labels to give you a full understanding of what you are looking at.” Wheaton realized that if the Museum had its own app, then the museum staff could not only connect with more students, but also reach more members of the community. 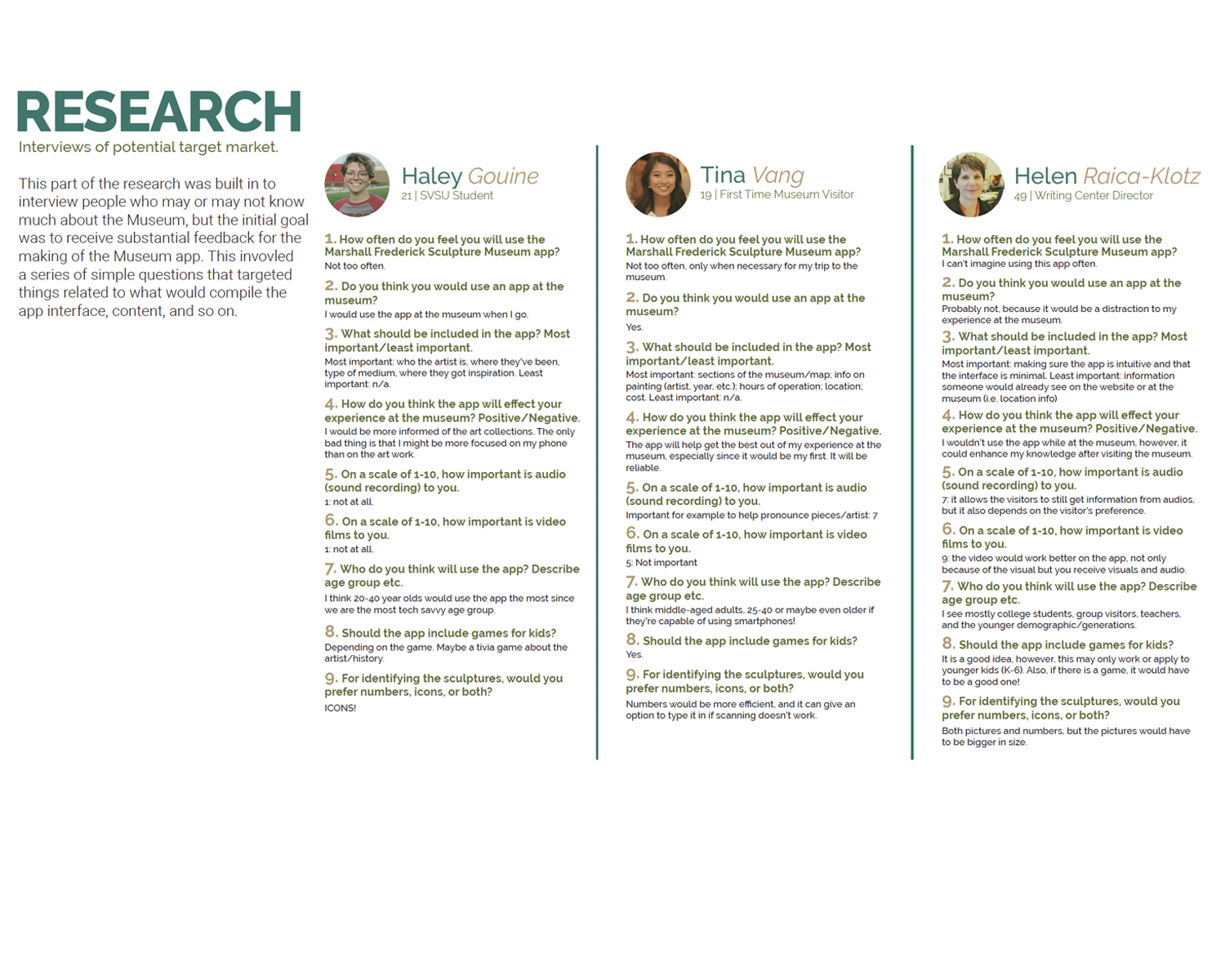 The design was started with thorough research determining the needs of the average museum visitor. 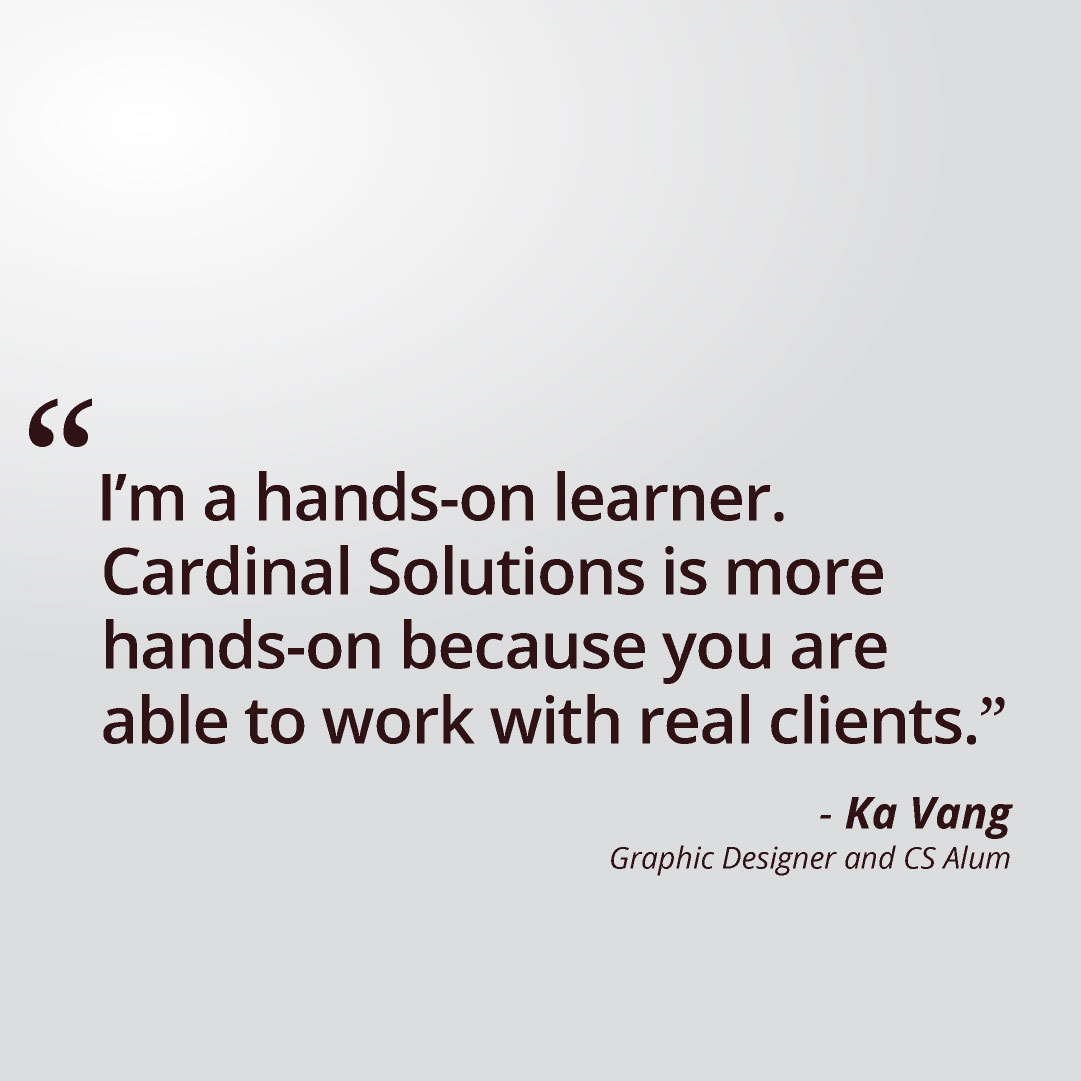 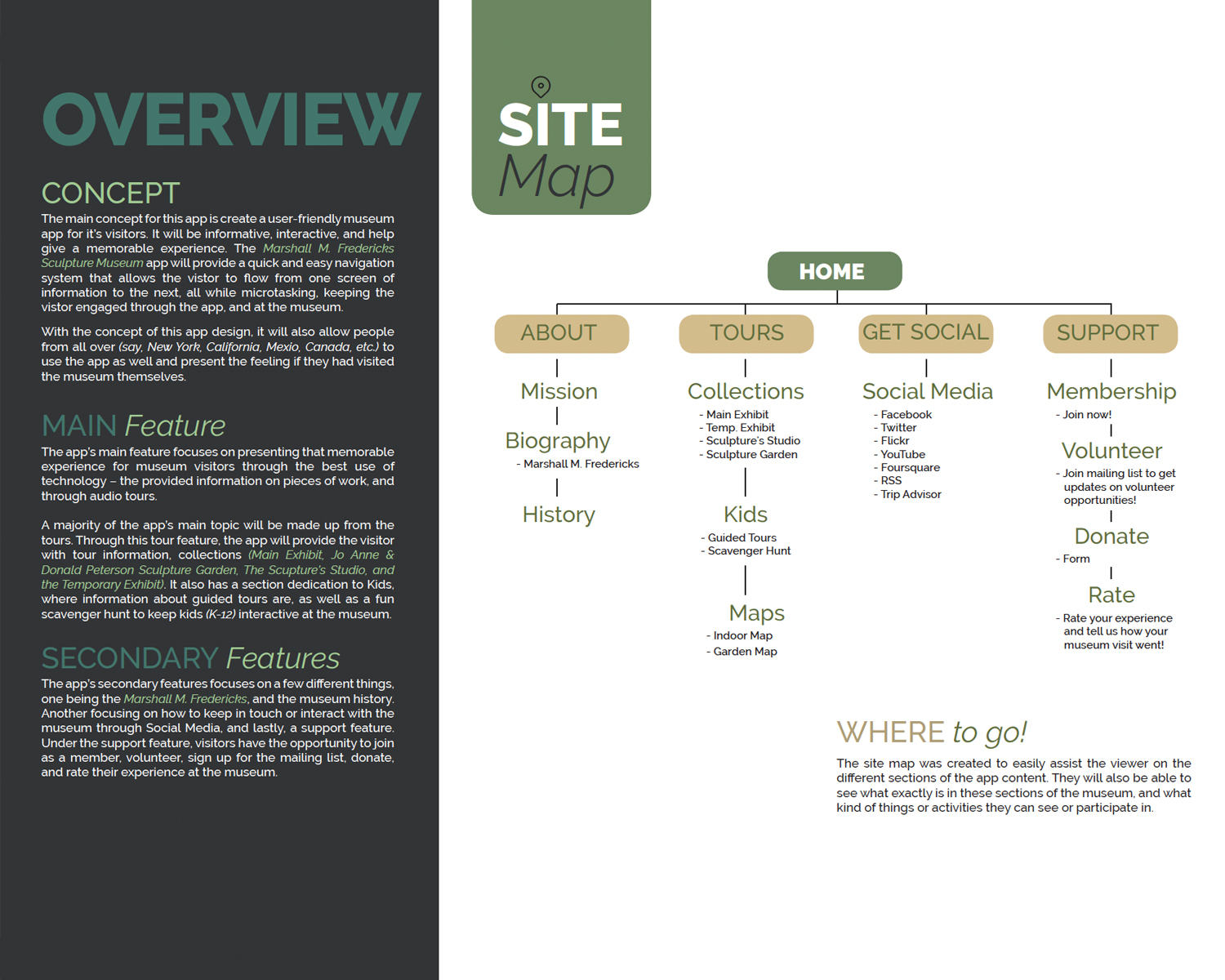 Once the features were determined, a flowchart was outlined.


Wheaton and her colleagues worked on creating the audio files for the app. Wheaton spent days in a quiet place on campus with Dan Goodell, formerly of U-Comm, who recorded her reading the articulated language that would accompany every object in the Museum. Wheaton also reached out to Provost Deborah Huntley and Professors George Corser and Blake Johnson about her idea for a museum app. These discussions led to a collaboration between a computer science student in Corser’s class and graphic design students in Johnson’s class.


Vang, the graphic designer who was awarded the project, says she enjoyed being able to take a project that started in a traditional classroom farther as a member of Cardinal Solutions. “I’m a hands-on learner,” Vang says. “Cardinal Solutions is more hands-on because you are able to work with real clients.” Vang’s app design proposal was chosen from several completed for Johnson’s course because Wheaton believed “it really captured Marshall M. Fredericks and his work.”


Vang completed the majority of her work on the app during a summer semester in 2016. Her primary goal was for the app to serve as a guide and be informative to visitors. However, Vang also considered the segment of her audience that would take the virtual tour instead of, not in addition to, visiting the Museum in person: “I remember trying to create the app in a way where even if people were from a different state or a different city and couldn’t make it to the Museum, the app would still function for them,” she says. “They could still go on the app and learn about each sculpture or a specific sculpture they might be interested in.”


Following her work on the Museum app, Vang worked with Cardinal Solutions for two additional semesters. She applied to the program first as a Graphic Design student and later as a Marketing student (her major and minor, respectively). Because Vang’s niche, social media marketing, requires both design skills and business skills, an interdisciplinary experience like Cardinal Solutions was a great fit for her interests and goals as a student. “It was rewarding to work with other people who study different disciplines,” says Vang. “I learned how their process works, what they can help with, and their strategies for solving problems.”


The finished app features the 20 best-known sculptures in the main gallery and all of the sculptures in the sculpture garden. In addition, visitors who download the app can read about the mission and history of the Museum and learn more about Marshall M. Fredericks. “My goal was to take people deep into the thinking of Marshall M. Fredericks when he was creating these objects,” says Wheaton. “Within a year we had all the design work done, and we were deliriously happy with it.”


Wheaton believes the app will positively impact visitors’ experiences for two main reasons. First, the app makes it possible for visitors to take self-guided tours when a Museum volunteer is not available to guide them through the sculpture gallery or garden. Second, the app allows visitors to play audio about a given sculpture, which benefits people who find reading more difficult than listening due to their eyesight or learning style. 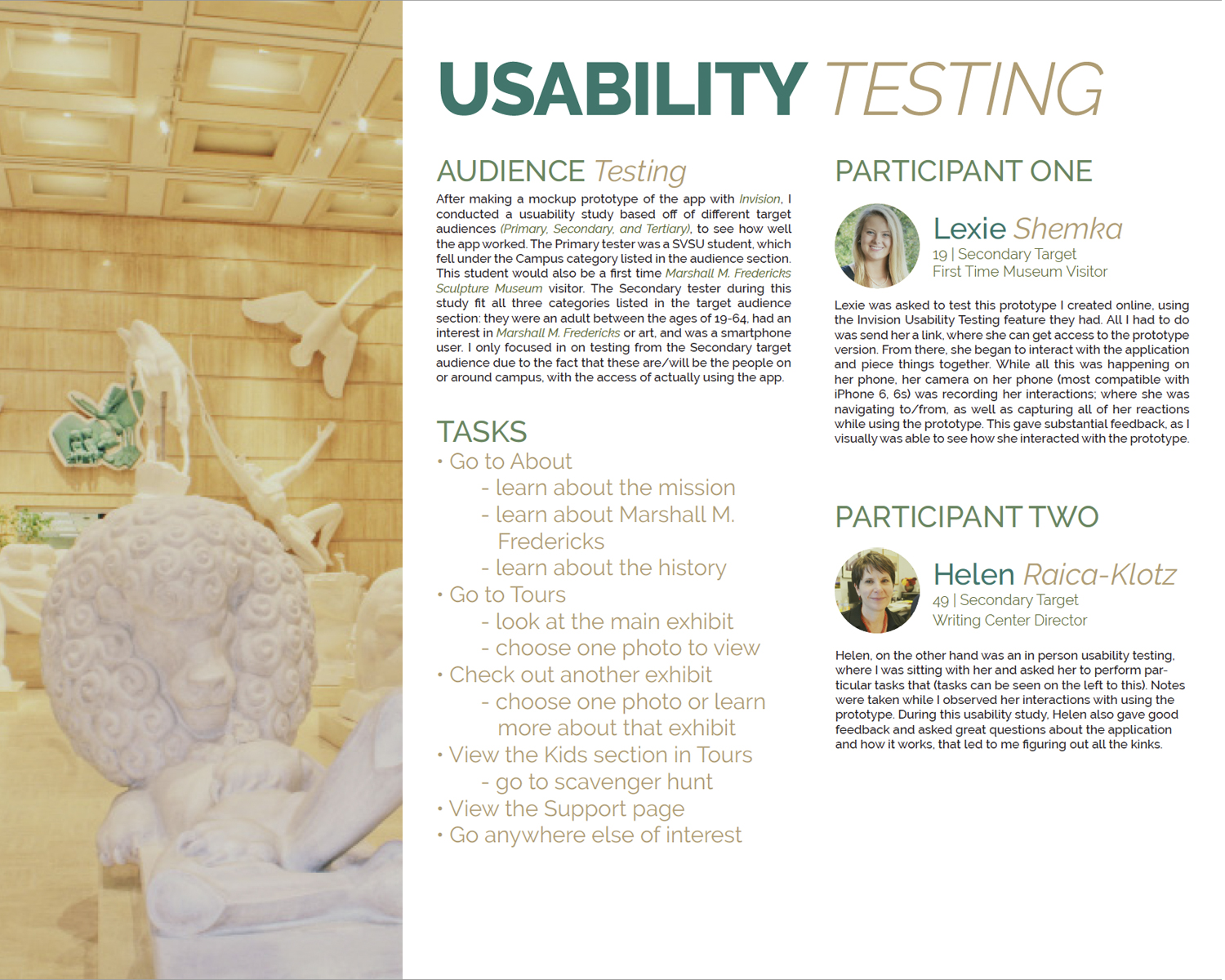 Usabilities studies were completed at multiple stages of the app development. 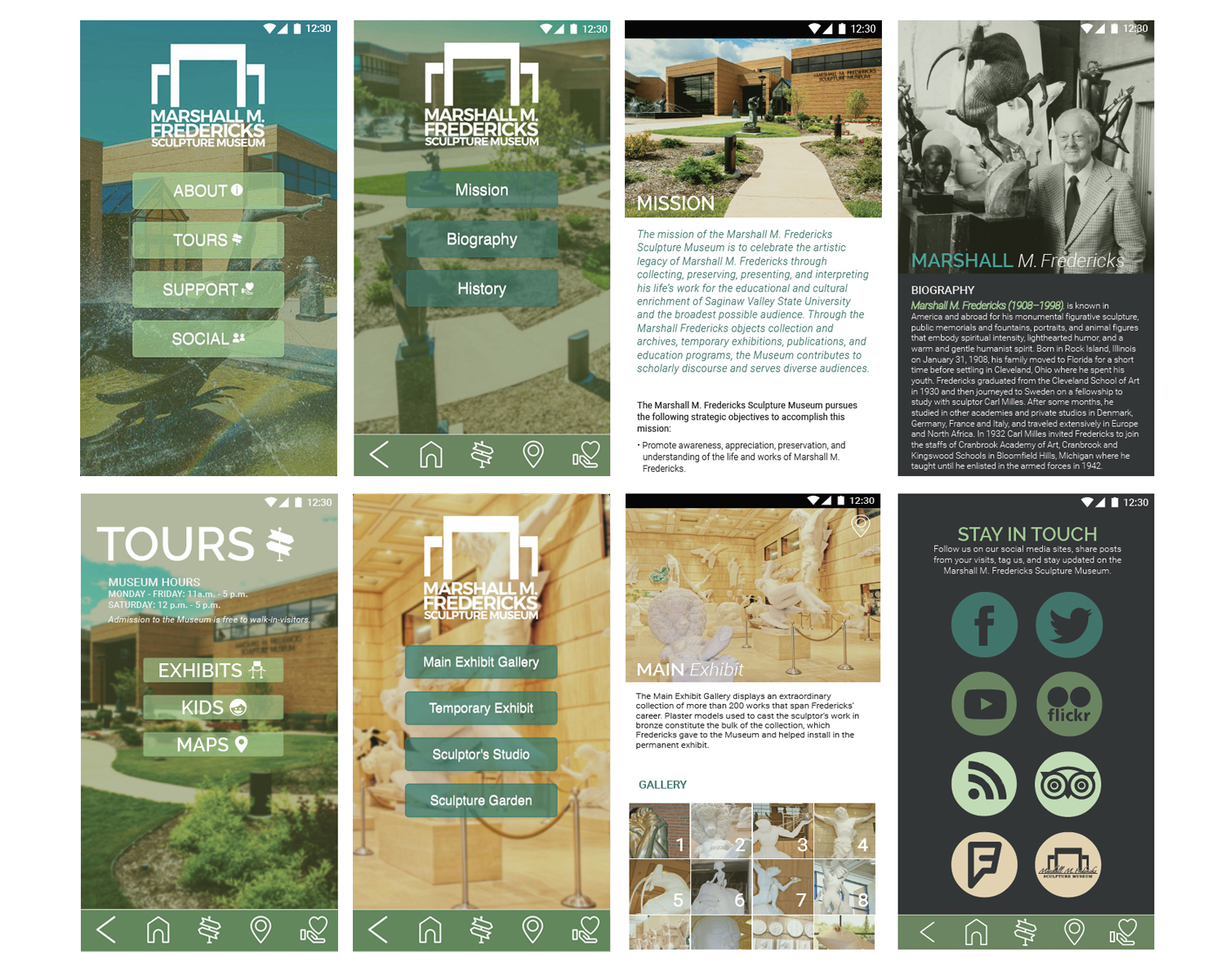 A few of the many screens that made up the final museum app. 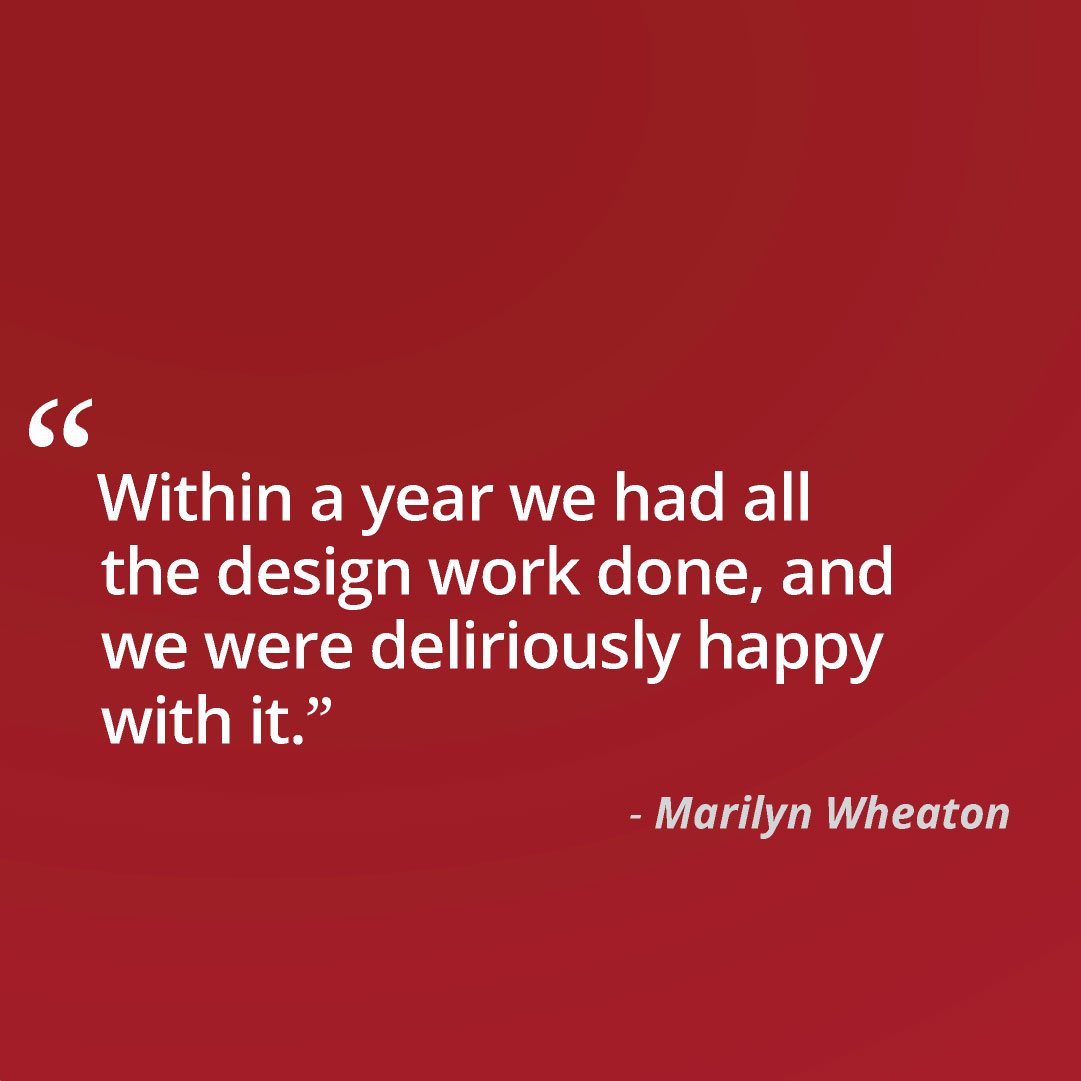 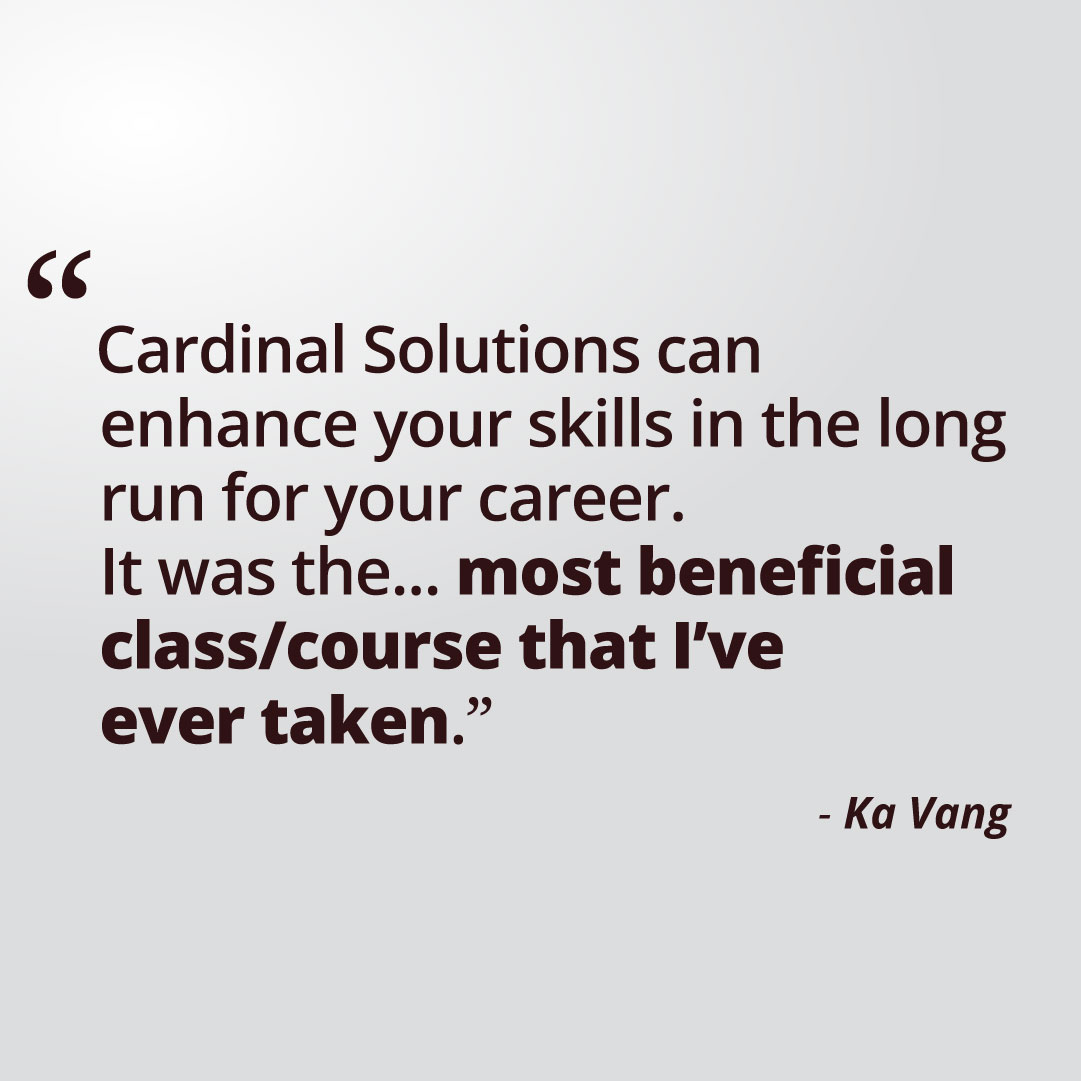 
According to Wheaton, the app received very positive feedback from the Museum’s board members, many of whom shared news of the app’s release on their social media accounts.


Vang, who currently works as the creative lead at PGN Agency and a freelance graphic designer, says the teamwork skills she picked up in Cardinal Solutions were valuable in her transition to working with an agency. Thanks to hands-on learning projects such as the Museum app, she gained a better understanding of—and deeper appreciation for—the tools and strategies that drive meaningful interdisciplinary collaboration. A former project manager at Cardinal Solutions, Vang now fulfills project management responsibilities on a daily basis. “In Cardinal Solutions, I learned how to manage a group of people and make sure that projects are getting done and moving smoothly,” she says. “I do that every day now. I act as a project manager because I’m basically the creative director here.”


In the project management role she held during her undergrad, Vang learned how to present her work to teammates and the client, among other soft skills. “Presenting your work to others is intimidating at first,” she says. “We are often our own biggest critics, so it’s very intimidating when you have to go up in front of a group of people and convey your idea or your message or present your project.” Her presentation skills have come in handy in the workplace. For example, Vang recently worked with a coworker to explain to others why changes in the company’s brand were necessary and how this would serve their target audience: “It’s important to break through that nervousness—because you know what you’re talking about, you just have to build up that confidence to be able to tell it to other people.


“For somebody who is thinking of joining Cardinal Solutions, I would advise them to definitely go for it because Cardinal Solutions is going to be worth it. It can enhance your skills in the long run for your career. I’ve gained so much from it even in the short time that I was in it! I wish I had been in it for even longer after the fact or that I was able to join sooner than I did because it was the . . . most beneficial class/course that I’ve ever taken.” ■