One of the reasons for the website overhaul was the desire to tailor sections of SVSU.edu to an outward-facing audience. Before the overhaul, Huntley says, prospective students who were exploring an academic program page for their potential program of study might seek out information about their classes, only to be “bounced back to the catalog.”


Huntley reached out to Professor Blake Johnson, who coordinates design work for campus and community clients in Cardinal Solutions. Johnson went to Dr. Bill Williamson and Dr. Scott Kowalewski, who run the usability lab at Saginaw Valley State University (SVSU), to ask for their help and for one Professional and Technical Writing major for the project. These professors in turn worked with the students to assist them in the design and testing of the program pages.


“SVSU wanted to see how the pages were performing and if there was a way to make it so they were more effective and useful for prospective students, including transfer students and recent high school graduates,” says Josh Maday, a senior in the Professional and Technical Writing program at SVSU who was involved in running usability tests on the academic program pages and creating fresh content for these webpages. 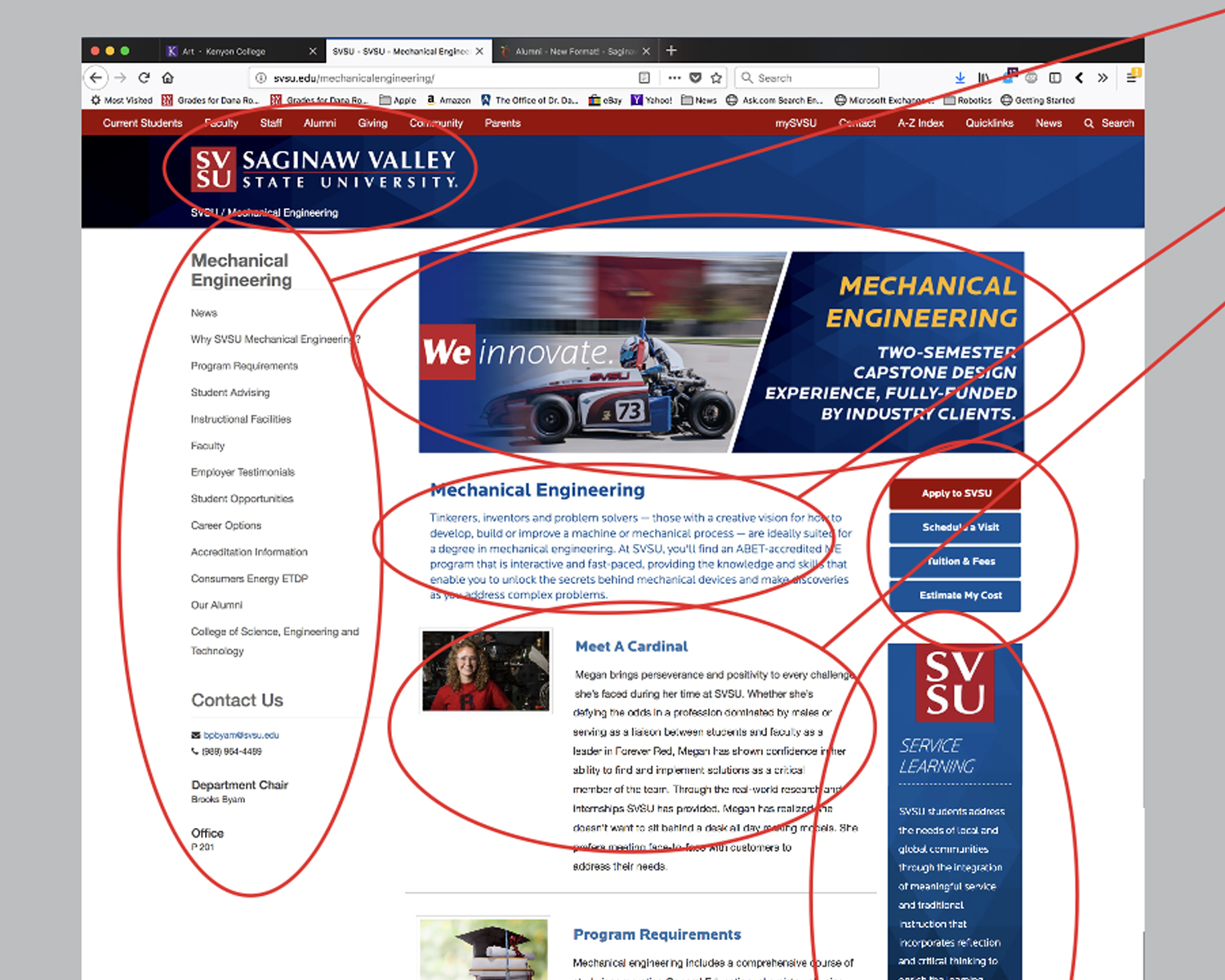 Old Design — circled in red, one concern: Too many focal points. 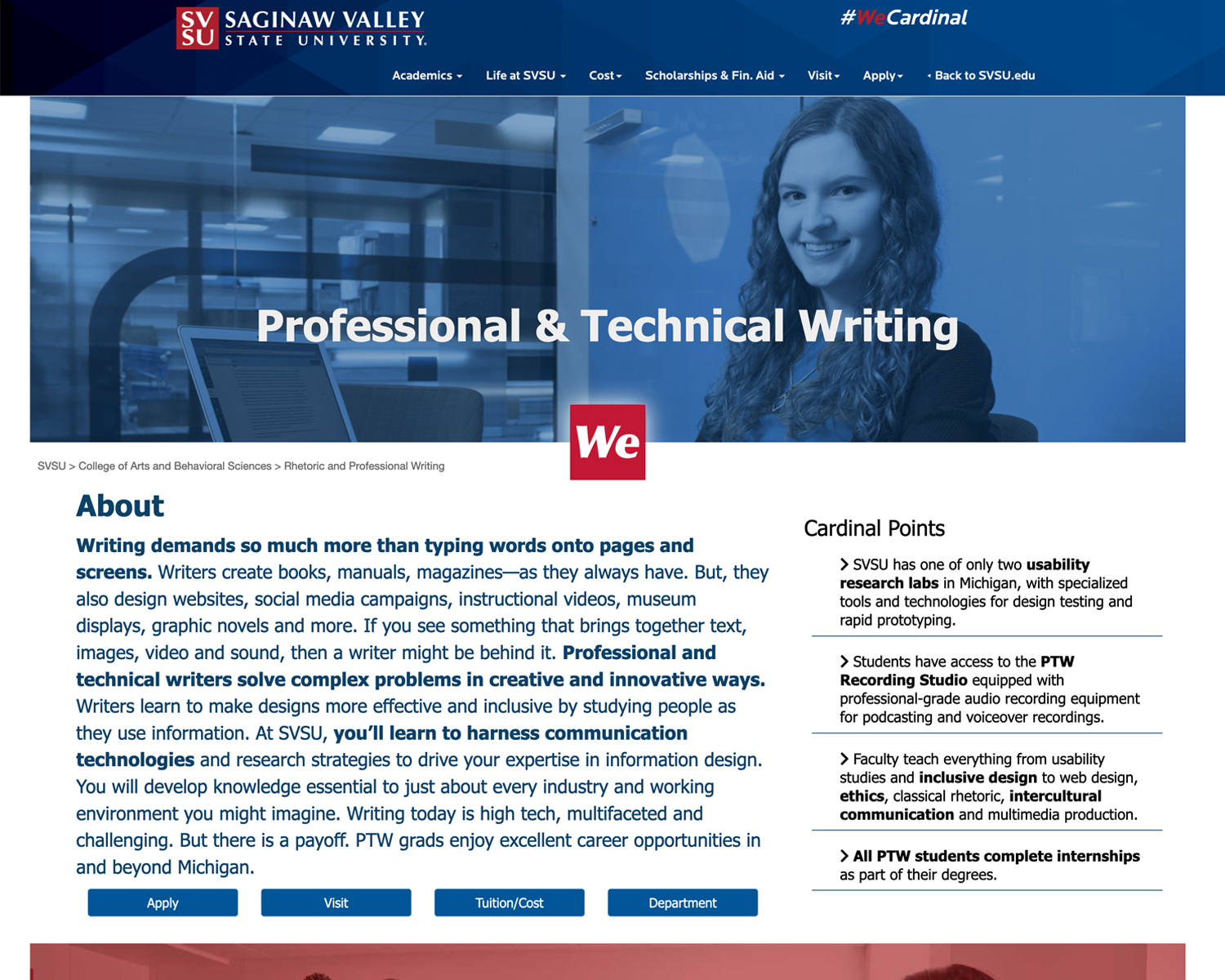 
Maday is a non-traditional student who balances a full-time career, freelance work, and family responsibilities with two or three classes per semester. “When I started in the technical writing program, I just wanted to do my homework and not bother with trying to get involved with things,” he remembers. “It was a couple weeks into my first semester when I thought, ‘I can do that. Or I can make the most of this and take every opportunity that comes up.’”


Because of his past experience working for the family business, a small construction company in the area, Maday had already internalized the value of collaborating across programmatic and professional disciplines and “learning how to speak other people’s languages” by the time he joined the academic program pages project. Maday learned about the opportunity to test SVSU’s web pages from Williamson and Kowalewski: “Dr. Williamson and Dr. Kowalewski mentioned that they were doing work in the usability lab over the summer and asked if I wanted to come on board, and I took the opportunity. That was ultimately how I ended up getting involved with Cardinal Solutions because Professor Johnson was heavily involved in the usability project that we did. He was running the design of the web pages.”


Maday’s team conducted a series of scenario-driven, think-aloud protocols on the academic program pages. In this type of usability test, a participant is given a scenario and asked to think out loud as they complete a series of tasks related to that scenario. For example, Maday and his team might ask a high school student to find the cost of attending SVSU for two semesters in order to learn how and where participants may encounter difficulty locating this information.


Because the academic program pages project represented Maday’s first exposure to the field of usability, he learned a great deal about how to administer an effective user test: “In terms of doing a study with people who are looking at the website, we didn’t use the language that we use when we [as professionals] talk about doing user testing. It’s just a matter of being aware of your different audiences and aware of your own language. If your language is specialized, then there’s a need to explain what you mean in more general terms, which can be difficult. When my team was administering a test, we had a script so that we could lay out and critique the language before we used it, make sure we didn’t miss anything, and keep each test consistent. If you’re doing testing, you also need to ensure that you’re not suggesting any particular direction or answer to the participant without explicitly doing it. A script increased our confidence that we weren’t leading participants in any way.”


In addition to think-aloud protocols, Maday’s team conducted focus groups, including a focus group for transfer students, and designed a map activity in which participants wrote down the pathway(s) they took while completing a set of tasks within a user scenario.


“The fun part about user testing is that you learn things that you didn’t even know you were looking for,” Maday says. “You make assumptions about what people know and what people want and need, and usually you’re surprised. For example, a lot of the high school students, when they looked at the undergrad and graduate programs on the SVSU website, assumed that the graduate programs were for them because they were graduating from high school. My team had definitely not anticipated that disconnect, that gap in their understanding.”


When Maday’s team studied the original web pages, their most significant findings were the language barriers between SVSU and prospective students and issues with the search function: “One problem was that students didn’t know exactly what they were looking for, at least in the way that the institution described it. They had their own idea of what something was called, which often didn’t match what it was called at SVSU. Another problem was that the search functionality was not consistent. The search returns included multiple versions of pages, which had been updated at different times, so the person searching wouldn’t necessarily know which one they should pick.”


In total, Maday’s team worked with between 20 and 30 participants, including high school students and freshmen and sophomores at SVSU. After gathering data and identifying common pain points students encountered with the current set of academic program pages, the technical writing team collaborated with Graphic Design to draft fresh program pages. Maday found that he could transfer the interdisciplinary collaboration skills he had learned while working for the family construction company and in other career contexts to Cardinal Solutions.


“Technical Writing wouldn’t have been able to do the work that we did if we hadn’t been collaborating with Graphic Design to know, for example, how much space we had to write copy,” says Maday. “Of course, we already had some best practices as a rough guideline, but in order to make the web pages a really cohesive and coherent experience for site visitors, working across those disciplinary lines was really important. Everyone has their own specialized language, their own lingo. If you don’t understand what someone is talking about, it’s okay to say, ‘I don’t know what you mean. Can you explain more?’ I think a lot of people get into the habit of not saying, ‘I don’t know’ because they don’t want to look ignorant, and that’s where communication starts to break down.”


The Cardinal Solutions team wanted to make sure that A) the departments and programs were presented in a way that satisfied the faculty, staff, and students within those programs and B) the academic program pages served the function of attracting qualified students to the programs. This required them to balance the needs of various stakeholders and engage in meaningful collaboration with people who think and work differently.


“When we did some interviews with the department chairs, and later some drafting and revision with them, they wanted to describe things in a certain way,” Maday recalls. “They obviously know what they’re talking about, and eventually, a student who goes through the program will know what they’re talking about. But a prospective student may not really know the meaning of some of the terms they use. It took a little negotiation to show department chairs the value of making their academic program page accessible, understandable, and free of jargon. Prospective students will learn these things, but they don’t know them already.”


Cardinal Solutions found that prospective students wanted an aesthetically pleasing website with clear and understandable content. “In terms of content, we needed to provide information that was useful and usable for the people looking at it,” Maday says. “So we needed to find out what things prospective students were looking for. They wanted to know how much their education was going to cost. They wanted to know what they could study and what their program of study would involve. They wanted to know what opportunities their degree would open up and their likelihood of being hired within six months of graduation. That information needed to be readily accessible, easy to find, accurate, and of course, up to date.”


Maday says that the preliminary program pages read a lot like marketing copy to the prospective students who interacted with them in usability test sessions: “Descriptions that are full of marketing speak have a lot of words, but they don’t say much. So, we wanted to make sure that there was useful, concrete information in our updated descriptions. We wanted to give students the message ‘Here’s what we do at this program. And here’s what you can do.’” 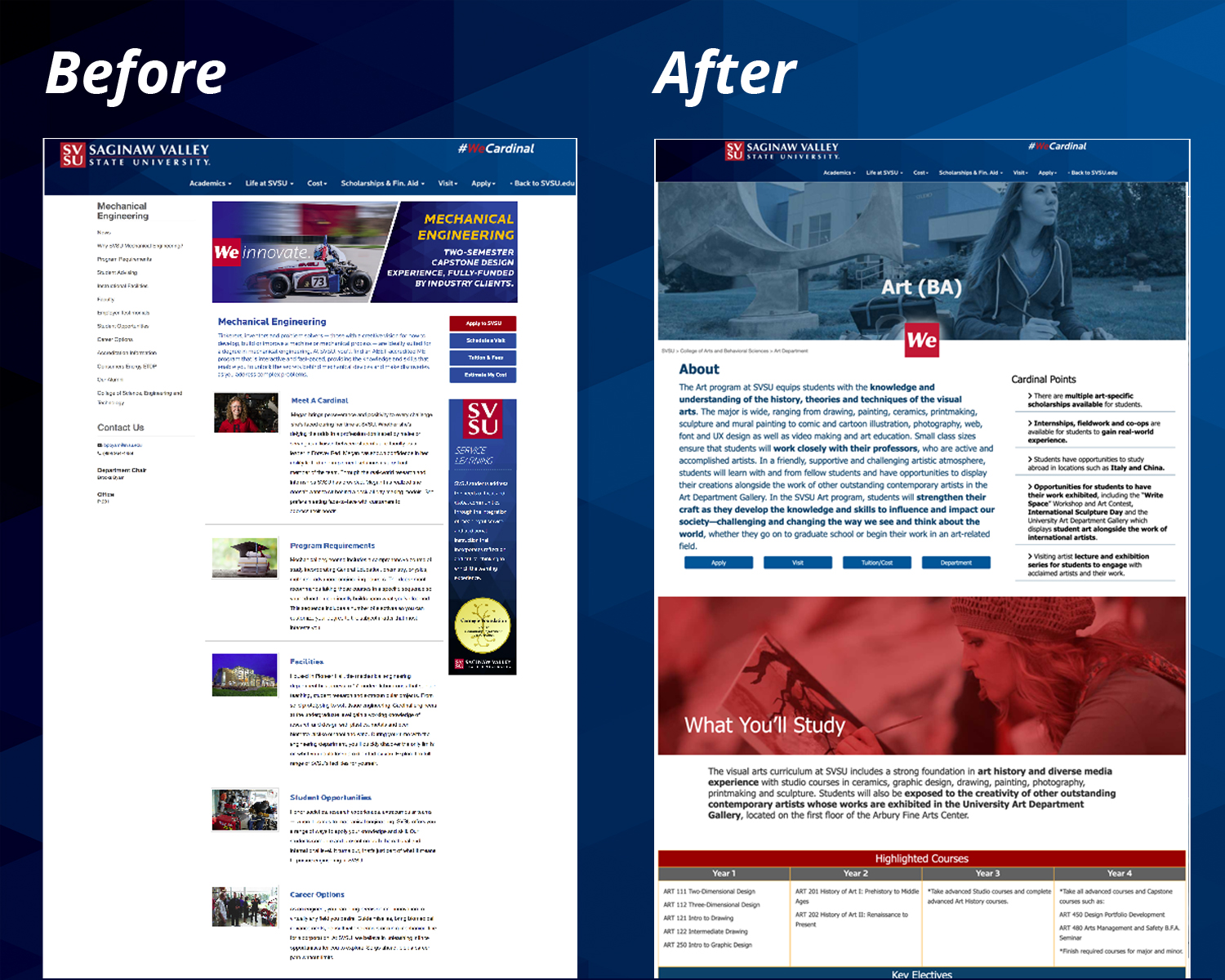 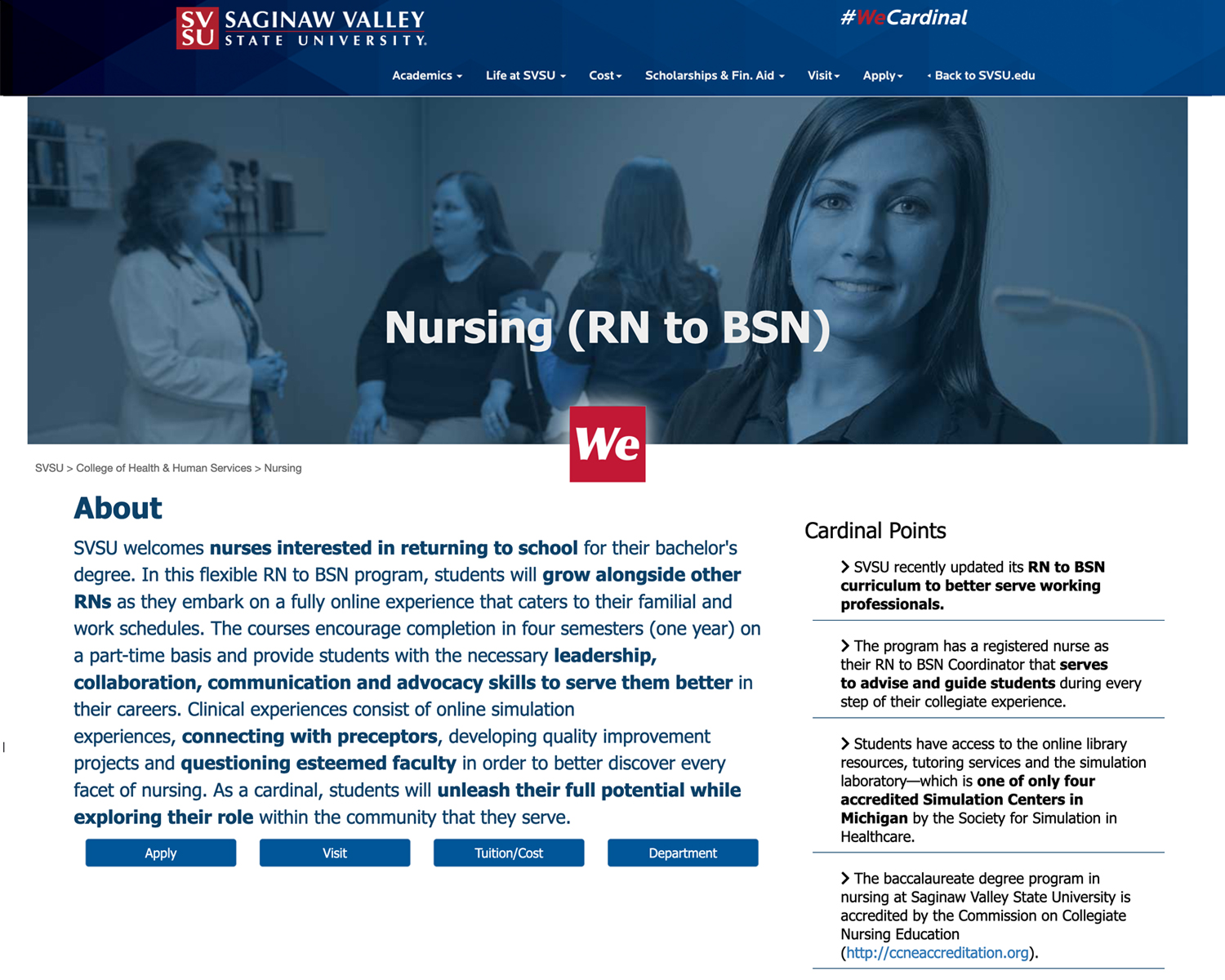 
Maday’s team compiled a report explaining their recommendations and submitted it to several people in leadership at the University. There was a lot of good feedback. “It’s rewarding to see that the work my team did trying to improve the academic program pages was taken seriously and implemented,” says Maday. “It’s cool to see your work like that.” Many of the team’s recommendations can be seen in action on the SVSU website today.


According to Provost Huntley, a number of new or revised features of the SVSU website resulted from the usability studies. When prospective students visit the page for an academic program of interest, for example, they can now find success stories from alumni. This initiative, which was suggested by both Cardinal Solutions and the technical writing program, gives high school, transfer, and non-traditional students alike a more complete mental map of their options for a post-graduation career path. “The updated pages show outcomes and tell stories,” says Huntley. “They have been well-received in terms of usability and visual appeal.


Huntley is also impressed that the revamped pages show prospective students an example of their class schedule by year, which saves students who are new to navigating the SVSU website from needing to move back and forth between academic program pages and course catalogs, and provide them with a list of complementary minors and second majors. She says both of these features help address the language barrier between prospective students and institutions of higher learning. “Many students think they’re interested in something, but they’re not sure,” Huntley explains. The “related programs” option allows students to find a program that fits well with their interests whether or not they have the exact name of that program in mind.


Maday currently works as a senior digital content specialist for the SEO company Terakeet. He believes that working across disciplines and learning how to speak each other’s languages are crucial skills in any and every workplace. “I have talked about my experience with the academic program pages project with the UX lead at Terakeet and the leader of content at Terakeet, and they definitely valued it,” Maday says. “One of the awesome things that this project has opened up for me is an opportunity at Terakeet to work across teams and departments. I haven’t done that yet, but the possibility is there in the future. If I hadn’t been part of the academic program pages project, I certainly wouldn’t think it was something that would be open to me.” ■